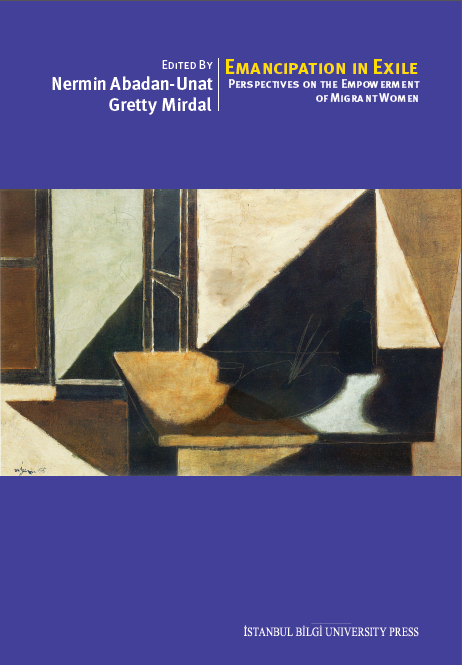 Emancipation in Exile: Perspectives on the Empowerment of Migrant Women

Whereas labour migration had primarily been a male phenomenon throughout history, large numbers of women began to migrate from the South in order to find work in the North of Europe in the 1970’s. In the case of Turkey, women of rural or small town background who had never been employed, who were mentally unprepared, and to some degree unwilling to leave their homes, were suddenly urged by their male relatives to take up industrial or service jobs in foreign countries. By 1974 there were almost three times as many Turkish women working in Germany compared to the number of women in Turkish industry. At that time, Professor Nermin Abadan Unat raised a question on the potential influence that this migration could have on the emancipation –or pseudoemancipation– of these women who were leaving Turkey to become industrial workers abroad. Four decades later, this volume analyses how social, political and religious changes in the home and host countries of the immigrant women, influenced the predicted processes of change. Has there been a significant increase in individual autonomy, self-determination and gender equality? Or has a hasty modernization created a false climate of liberation or “pseudo-emancipation”, without significantly increasing self-determination and independence? How has the very concepts of “emancipation” and “migration” evolved in the meantime? How do the women themselves perceive their own situation?_x000D_
Nineteen experts in social science, and migration and gender studies have contributed to this study of the processes of emancipation and the pathways to the empowerment of women who thought they were leaving temporarily but ended up spending their lives in exile.

The Editors and Authors

Foreword
INTRODUCTION Reflections on an Evolving Debate: Mobility, Modernity and Gender Orders Deniz Kandiyoti
1 Emancipation or Pseudo-emancipation: Fallacy or the Force of Social Control in a Global World Nermin Abadan-Unat
From the Status of Women to Gender Issues
Women’s Migration Begins... On an Individual Scale
Migrant Women and the Change in Family Life
Increasing Social Inequality: Questioning the Rational Economic Women
The Cultural Framework of Women in Muslim Societies with Special Reference to Turkey
Sexual Roles in Islamic Countries: Voluntarily Assumed or Imposed?
Globalization Changing Outlooks
Globalization and the Transition to Transnationalization
Circular Migration: The New Fashion
Female Migrants: Their Problems in a Global World
Conclusion

3 On the Emancipation of Women in Contemporary Turkey? Yeşim Arat
Women, Emancipation and Liberation in the Turkish Context
The New Challenges

9 Pathways to Emancipation: Immigrant Women from Turkey and their Descendants Czarina Wilpert - Ruth Mandel
Emancipation and Integration
Integration Elsewhere and Intersectionality
An Intersectional Approach to Immigrant Women in Germany
Emancipation or Subordination: Contradictory Trends?
Historical Precedents: Family Migration Patterns According to Women’s Role in the Migration Process
Typology of Migration Patterns
Cultural Diversity, Chain Migration and Women’s Alternatives
Future Aspirations of the Descendants of the Pioneer Guestworkers: Work Values in a Search for a Better Future
The Educational System and Opportunities for Social Mobility
Returning to the Question: Contradictory Trends: Achievement Despite Exclusion?
Gender and Ethnicity: The Social Position of Women from Families Originating from Turkey
Concluding Thoughts

11 Implications of International Migration for Gender Roles: Evidence from Those Left Behind in Morocco and Turkey Ahmet İçduygu - Deniz Karcı Korfalı
Introduction
The Impact of Migration on Those Left Behind
Method of Inquiry and Context
Migration, Remittances and Gender: Findings from the EUMAGINE Data
Concluding Remarks

14 Women on the Move: Impact of Migration Revisited Mirjana Morokvasic
Gains for Women?
Maintaining or Strengthening the Gender Order
Reliance on Gender Order: Turning it to One’s Own Advantage
Turning to Traditional Family and Marriage as Support
Good Mothers, Self-Sacrificed and Irreplaceable Heroes
Gendered Mobilities as Resource: The Rotation System
Mobile Entrepreneurs
Arrangements