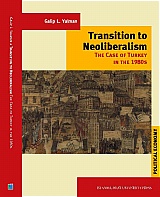 Transition to Neoliberalism: The Case of Turkey in the 1980s

State” and “market” have come to symbolise not only alternative strategies of capitalist development, but also rival premises upon which dominant classes in different capitalist countries have attempted to build hegemonic strategies so as to maintain various forms of the state and/or regimes. There is also a great deal of confusion about the nature of state-market relations, stemming from the fact that they are usually conceived as separately existing, if not always antagonistic, entities. Hence, there are diametrically opposite modes of explanations which purport to account for the same historically specific phenomena._x000D_
_x000D_
After a critical review of empiricist and subjectivist approaches which have provided the theoretical underpinnings of neoliberal hegemony since the 1980s, this book reiterates the indispensability of class analysis for a better understanding of the state and/or the market, and their interrelationship by adopting a critical political economy approach. Thus, the analysis of the relationship between state and bourgeoisie in Turkey is based upon a periodisation specific to the horizons of action for the agents concerned since the foundation of the republic until the end of the 1980s.  Accordingly, it identifies the Turkish bourgeoisie as a significant determinant of the economic policymaking process having achieved its class unity in defining its interests at critical turning points.

From Empire To Republic: Essays On The Late Ottoman Empire And Modern Turkey-Volume 1