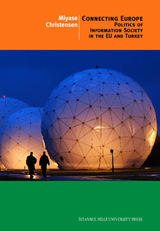 During the 1990s, in parallel with new media-related initiatives in the US and the Asia-Pacific region, the EU launched its own information society policies in an effort to become, “the most competitive knowledge-based economy in the world by 2010.” In addition to full members, the task of achieving a “European Information Society for all” was also expected of candidate countries, including Turkey.

CHAPTER I Introduction: Contextualizing “The Information Revolution” in an Age of Globalization
Communication Policy in a Global Milieu
The Political Economy of Communication
Commodification and Spatialization
PTT Systems in Developing Countries and Europe, and the Liberalization of Telecommunications Markets
The Role of the State: Implications of the Globalization and Liberalization of Telecoms and Information Sectors
Structure of the Book

Miyase Christensen is Associate Professor and Director of the Master’s Programme in Global Media Studies in the Department of Media and Communication Studies at Karlstad University, Sweden. Christensen obtained her MA and Ph.D. degrees from the Department of Radio-TV-Film at The University of Texas at Austin. She is the editor/co-editor of a number of books, including Shifting Landscapes: Film and Media in European Context (2008); Online Territories: Globalization, Mediated Practice and Social Space (2010); and, Understanding Media and Culture in Turkey: Structues, Spaces, Voices (2010), and the author of numerous international articles. Christensen participates in a number of international networks and projects that explore sociocultural aspects of media and technology, and her research focuses on social theory and trans-nationalization processes; social surveillance and the media; European media and information society; and politics of popular communication.